The company is based in Norway and the idea was that of an airline pilot with extensive sailing experience. The design of the Tidal Sails system is completely unique and has one of the smallest environmental footprints of any tidal power system.

The system has to be seen to be fully understood, so please refer to the diagram below. 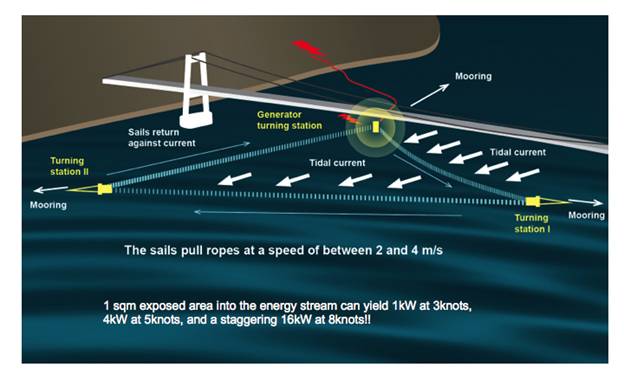 Diagram of Tidal Sails from: www.tidalsails.com

The system is relatively straight forward in concept, though explaining it without a diagram is near impossible. There are three turning stages that are connected to one another by two cables. Between the two cables are sail-shaped blades that make up the heart of the system. These sails capture energy from tides and are pushed along. As the sails are pushed, they drag the cable along with them. The cables, in turn, spin around the turning stations. One of the turning stations is connected to a generator and produces power.

The system is less expensive and more efficient than a tidal turbine. Current estimates are that the tidal sail cost 30% less and extract the energy of up to 30 turbines. The system can also be deployed in slow-moving waters and, because its unique design, poses little threat to marine wildlife.

The full impact of Tidal Sails on the environment is being tested at a small-scale installation in Haugesund, Norway. The system has a capacity of 28 kW. A commercial installation of 2-10 MW is being planned for further testing in the near future. Tidal Sails has won several awards for its design.