OpenHydro is based in Dublin, Ireland and categorizes itself as a technology company that designs and manufactures turbines for tidal stream settings. The company vision is to deploy tidal turbines at no cost to the environment. To that end, the company has developed the Open-Centre Turbine. OpenHydro has estimated that tidal resources could produce electricity equivalent to about 16 billion euros per year.

The turbine designed by OpenHydro is unique in that it is hollow in the center, as the diagram below demonstrates. 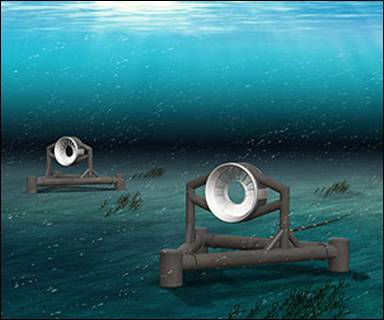 The idea is that these turbines will be used in open ocean settings in tidal stream generator schemes. Because they are open in the center, they minimize the risk to marine life while still providing outstanding power generation. The lubricant-free, slow moving rotor will not leak contaminant into the ocean either. Current turbines are 6 meters in diameter, but the company has designed them for easy scaling.

OpenHydro has test installations in three areas. The first is at the European Marine Energy Centre in the Orkney Islands or Scotland. The first Open-Centre turbine was installed at EMEC in 2006 and has been shown to produce very low amounts of mechanical noise.

At Alderney, in the Channel Islands, OpenHydro has partnered with Alderney Renewable Energy to install a small array of Open-Centre turbines. Eventually the site could host up to 3 gigawatts of tidal energy generators.

Finally, in Nova Scotia, Canada, Open Hydro has installed a tidal demonstration facility in the Bay of Fundy. If the demonstration is successful, the company will be invited to display a large scale tidal farm in the bay.