OceanFlow Energy is a UK-based company that has developed a tidal power system known as the Evopod. What makes the Evopod unique is that it can be use in any water current setting including rivers and combined tide/wave settings.

Evopod employs a standard horizontal axis turbine (HAT) that floats rather than being tethered to the ocean floor. The problem with floating systems, however, is that they pick up wave motion, which then decreases the efficiency of the turbines by altering their direction to the tidal flow. The Evopod system employs a waterplane as well as struts and tethers to ensure that the system remains aligned with the tide. The system is modular and can be single, twin, or array-sized. The twin system is shown below in a diagram from the OceanFlow Energy website. 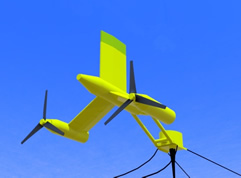 The Evopod system is currently being tested at 1/10th and 1/4th scales in Sanda Sound in Scotland and at Strangford Lough in Northern Ireland. The 1/10th scale Evopod was designed as a proof of concept demonstration unit and had an output of 1 kW. The system was tested in Strangford Lough.

Future projects will target currents in the UK, South Africa, and the United States. The company estimates that the South Africa market has a potential to generate 10 to 20 TWh per year of electricity and that the UK could supply up to 10% of its needs through the use of the Evopod. Part of the impetus for the Evopod design arises from the fact that 80% conditions. Addressing these conditions in a safe, economic, environmentally responsible manner is necessary to guarantee the acceptance of tidal energy.